The third day at a major tends to be all about surges through the field. Today only a handful of players managed this whilst the rest of the field dropped steadily back. It is entirely possible that we are set for one of the rare occasions where the leading score after round one is lower than the overall winning score. Going into the final round Darren Clarke is the outright leader on five-under par, the very same score posted by Thomas Bjorn and Tom Lewis on day one. With today’s foul weather forecast set for something of a repeat performance tomorrow, scoring patterns are again likely to be sliding even further backwards.

Bucking today’s scoring trends were the likes of Americans Dustin Johnson and Rickie Fowler. The pair of them carded odds-defying rounds of 68 pushing them up the leader board and right into contention. As a result of these rounds Johnson will go into day four playing alongside Clarke in the final group and just one off of the lead and Fowler has moved from level par to two-under.

Tomorrow provides the chance for these two young pretenders to really put a stamp on world golf and what better way to do so than by bagging a major title. Johnson has already won four PGA Tour titles, an impressive feat for one so young, but will forever regret the golden opportunities which have passed him by in major golf already. Two years ago he went into the final round of the US Open at Pebble Beach in links-style conditions only to collapse to a round in the eighties and fail to even come close in the final reckoning. He followed this up at last year’s PGA Championship by going down the final hole as leader only to lose it on a club-grounding technicality. 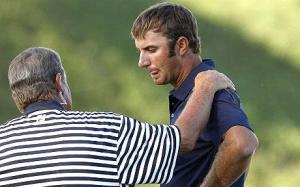 The latter of these sour major experiences for Johnson must have been excruciating. He was notified en-route to the green that he was being investigated on grounds of having floored his club before firing in his approach shot. He then had his worst fears confirmed by tournament officials in the scoring hut after completing the round. His angst at this slightest little error in judgement and seeming pettiness of golf ruling was clear for all to see as the cameras gaze was placed firmly upon him when signing off his card. Few could admit to not feeling for him in this most agonising situation.

In contrast Fowler’s regrets in his budding career aren’t quite as significant. However, he is yet to have won a single professional title and people won’t stop reminding him of this until he does. He has been in contention on several occasions o the PGA already but he really does need to land a title in order to put off his doubters. Making his first tournament victory a major would surely see him heralded as the US’ most threatening young prospect and endear himself to portions of the public who are yet to have taken to him. 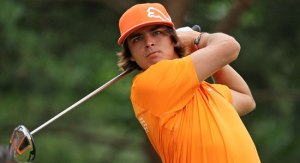 Fowler in 'Sunday Orange', one hopes he has this in waterproof style

Both of these young Americans have demonstrated great maturity and a real flair for links golf. Dustin Johnson’s foundation is his monstrous driving, which has unsurprisingly been on fire here so far this week. He has slowly climbed his way up the leader board and has holed several pressure puts at key moments as well as landing a magnificent hole-in-one on day one. Some might argue that Johnson has benefited from playing at times when the weather has been fairer, the same can certainly not be said of Fowler. He has in fact probably had the worst of the weather throughout as was demonstrated by playing partner Rory McIlroy’s inability to keep pace with the form man throughout the three rounds which they have played together. Where McIlroy has missed his chances to stay in touch, Rickie has taken them and he fully deserves to be considered one of the favourites going into tomorrow.

Clarke leads the pack and has plenty to smile about

As well as the youthful stars of the US there are also major European hopes heading into day four and they all seem to be names you perhaps wouldn’t have anticipated going in. First round leader Bjorn is still there or there abouts, Miguel Angel Jimenez is only three shots back in his bid to become the eldest Open champion of all time, and Darren Clarke has maintained his lead and is set to follow the rest of these boys out tomorrow. Is it possible that the old-guard of the European Tour can fend off a last day challenge from the PGA’s finest young prospects? An intriguing battle lies in wait.