A few tough weeks are not yet forgotten, but England’s performance against a poor Romania side this morning provided some significant respite. Less unforced errors, fewer moments of silly indiscipline and a more assured and confident day with the ball in hand all added up to a much improved showing from Martin Johnson’s men, and it was about time.

Though the opposition were at times staggeringly poor, it was vital that England treated the game with respect and that they did. From their early decision to slot three nerve-easing points from a penalty to their late attempt at what would have been an incredible breakaway try, England performed with total professionalism and hunger as finally they laid down their marker for the tournament.

In a week where South Africa and Australia silenced their critics it was the perfect time for England to make an impression and this result may not have sent out shockwaves, but it certainly will have made a few teams sit up and take note that England aren’t a team in total disrepair.

No matter how poor their opposition were it was encouraging to see England playing with far greater intent and this was helped dramatically by their improved handling throughout. Ben Youngs dictated the pace of the game very smartly at 9 and got the England backs firing right from the word go and he was well supported by Jonny Wilkinson in the first half and Toby Flood in the second. The combination play between the half-back pairings was neat, tidy and efficient and brought England’s try-scorers into play on a consistent basis.

It seemed that England knew a simplistic approach would suffice if they injected pace into their attacks and the vast majority of their tries came as a result of this approach. England were strong up front and endeavoured to provide Ben Youngs with the quick ball he thrives upon and this enabled the likes of Manu Tuilagi to play a starring role. 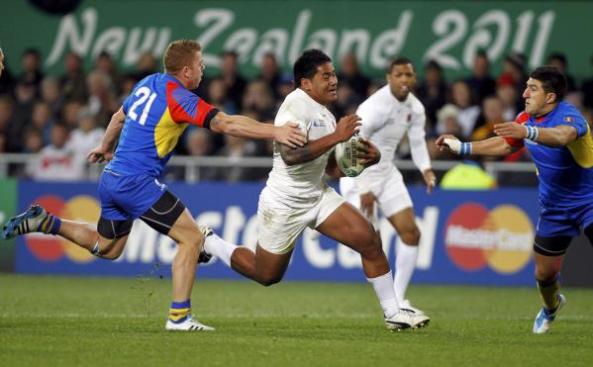 Tuilagi revelled in his greater involvement in attack

The young Pacific-Island dynamo was invited to play at his dangerous and brilliant best this morning with the quick service allowing him to take the ball on the shoulder of Wilkinson and Flood right up on the gain-line. For me he was the real star of England’s display and he was demonstrative of everything that England did right in attack today. His support running was fantastic and his hands consistent as he continuously made breaks through Romania’s defensive line and provided the simple hands necessary not just to score himself but to provide assists for others. In England’s previous games they haven’t played with enough confidence and conviction to bring Tuilagi and their other devastating supporting runners like Chris Ashton in from the fringes of the game, but today was a totally different story.

Has the penny finally dropped for England in New Zealand? It seems it has. Simple and strong rugby played at pace usually does for the minnows in tournament play and boy did it work today. Romania’s display was committed as was expected, but their error-strewn handling, shabby set-piece play and their inability to keep pace with England’s relentless execution of the basics meant that they failed to keep touch with their far more able opponents. From now England’s remaining matches in this World Cup will all be against truly world class opposition. Their next opponents Scotland have a huge match against Argentina tomorrow and whatever the result is they will be coming for England’s blood next week.

It is fair to say that England’s more direct and simplistic approach was suited better to today’s task rather than their upcoming encounters, but they would be well advised to take note that uncomplicated rugby does work if executed with confidence. England’s more exciting performers like Youngs, Tuilagi, Ashton and Ben Foden are the key to their potential success at the World Cup, but the way to utilise them most effectively is to get the basics right in the first place.