Spain and Italy could hardly be going into this tournament having had more contrasting preparations for the tournament. 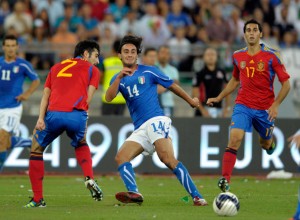 Spain have won both of the last two major tournaments and are heading into the Euros with a strong, familiar and for the most-part experienced squad and as such are very much being targeted by the rest of the field as ‘the team to beat’ to.

Italy on the other hand have disappointed on their two most recent outings in major tournament football, have a younger and more inexperienced look to their squad than usual and their domestic leagues have once again been embroiled in a wide-scale match-fixing scandal.

On the plus side  though for Italy, the last time their nation was under scrutiny amidst match-fixing issues they went to the World Cup in Germany 2006 and they came home as champions of the world. Also, as much as Spain may possess a squad packed with talent, class and depth they are missing a couple of the key players from their recent triumphs, Carles Puyol and David Villa, both of whom have failed to recover form injuries in time for the defence of Spain’s crown.

In spite of their high-profile injury absences Spain still have an embarrassment of riches at their disposal and I expect them to win 2-1 in the opening game of Group C. Just as an aside to my score prediction, I think it will be intriguing as it always is to watch Mario Balotelli and to see whether he looks like producing the sublime or the ridiculous at the Euros, both of which we know he is all too capable of…

If Balotelli and fellow front-man Di Natale can link well with each other then don’t write off Italy’s chances of getting themselves a draw but I think Spain will be a little too good for them on the day.

The second match on the opening day for Group C sees Ireland return to the big time and although they have a very tough looking group draw they will head into the tournament with great enthusiasm and the hope that they can spring a few surprises.

Their opening game pits them against Croatia who have at times really impressed in tournament football since returning as an independent nation in the early nineties and who possess a few of European football’s most sought after and most in-form players.

The two names that spring to mind immediately with Croatia in terms of their biggest assets are Luka Modric, who is on the radar of several European super-clubs, and Nikica Jelavic who has proved an instant hit in the Premier League with Everton. If Modric is at his superb best then it is likely that Jelavic and his fellow forwards will have plenty of scraps to feed on and if they do then Ireland could be in for a torrid evening.

Ireland are likely to set up in typical fashion as their manager Giovanni Trapattoni is very sure of his first XI and how he thinks they can be most successfully deployed. The manager tends to side with defensive responsibilities and his Ireland side are expected to soak up pressure and to try and produce match-winning chances on the break with the likes of skipper Robbie Keane ready to pounce at the top end of the field as and when chances might come his way.

It is essential that Ireland try and keep Modric under wraps as he has the potential to pull the strings and eventually pull Ireland apart with his clever running and eye for a killer pass. I think Ireland will give a decent account of themselves in this game but I expect Croatia to triumph either 2-0 or 2-1.