Every year our TV screens are awash with a Stat-Attack throughout Wimbledon fortnight so I have used the official Wimbledon statistics website to piece together the men’s tournaments most successful players in all areas of the game and tried to come up with a resulting amalgamation of a player that would be unbeatable on the courts of the All England Club. Here goes nothing… 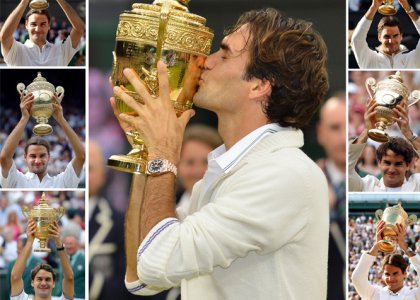 Serving Power: Jo-Wilfried Tsonga topped the charts with the tournament’s fastest individual serve when he rattled an 140 mph-er past Andy Murray in the Semi-Finals.

Aces: Philipp Kolschreiber produced the most aces in tournament with an impressive total of 98 at an average of around 20 per match on his journey to the Quarter-Finals where he was beaten by Tsonga.

Serving Accuracy: The tournament’s highest serving accuracy statistic belongs to Albert Montanes who landed 80% of his 1st serves in play. The Spaniard did however have little else to cheer about in his tournament as he fell at the very first hurdle.

Winning Points On 1st Serve: The big-serving Croat Ivo Karlovic produced a percentage of first serve points won of 86%, which is hardly surprising given the speed and angle his enormous frame helps him generate when his first serves find their required destinations.

Winning Points On 2nd Serve: Ernest Gulbis produced the tournament’s finest record in terms of winning points on his own 2nd serve with an impressive 66%. Sadly though this impressive stat couldn’t save him from an early second round exit from the competition.

Winning Points Against The 1st Serve: The now seven-time champion of the All England Club, Roger Federer, managed an impressive tournament topping total of 186 points won against his opponents 1st serves, which is of course a statistic aided by the fact that he played more matches than any other player in the tournament other than Andy Murray who also played seven times but his average of around 27 points won against the first serve per match is also superior to all other players in the draw.

Winning Points Against The 2nd Serve: Andy Murray, the beaten finalist at this year’s championships, topped the charts in this category with an enormous tally of 192 points won against his opponents 2nd serves throughout the tournament. His nearest challenger in this category was Federer who beat him in the final but the gap between the two in this department was a gaping 40 points.

Break Point Conversion: Without a pause for thought you might just assume that the tournament’s strongest performers in this department would have the highest percentage of break point conversion but actually logic prevails and two first-round flops Simone Bolelli and Thomas Berdych share the honour of having converted 100% of their break points in the Championships. This, if you think about it, is an unsurprising outcome as they only managed one break a-piece in their only matches of the tournament.

(All stats provided by the official Wimbledon website: http://www.wimbledon.com/en_GB/scores/extrastats/rally_count_ms.htm

So, according the official stats for the tournament the make-up of this year’s perfect men’s player at Wimbledon would be the serving power of Tsonga, the Ace-making ability of Kolschreiber, the 1st serve accuracy of Montanes, the 1st serve points conversion of  Karlovic, the 2nd serve points conversion of Gulbis, the 1st serve returning talents of Roger Federer, the 2nd serve returning talents of Andy Murray, Federer’s prolific serve-breaking powers and finally the break point conversion and ruthlessness of Berdych and Bolelli.

Unsurprisingly, it is Federer that has dominated proceedings in the creation of this Wimbledon ruling hybrid player make-up but there were also a fair few surprises thrown into the mix. The fact that Federer topped the most categories though goes a long way towards explaining why he won his seventh Wimbledon crown and why he could yet go on to win even more, he has an exceptional all-round game and over the past fortnight very few challengers have been able to live with him! Surely, he can for now be labelled at very least the equal best player of all time?