Last night’s virtuoso performance from Vicente may not have seen him get his own name on the score-sheet but the constant threat he provided in the role of playmaker was something rarely seen at Championship level. 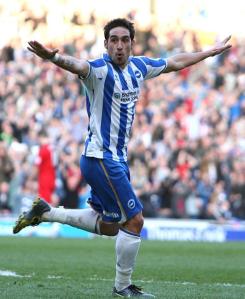 Vicente's return to fitness has lit up the AMEX

His footwork and vision was the cause of much indecision and worry for the Derby County defence on the night and this performance was just the latest Man-Of-The-Match performance from the Spaniard, which helped to extend the impressive run that the Seagulls are currently on.

With just one defeat in their last fourteen league games Brighton have pulled themselves back from a mid-season slump and right into play-off contention. They currently reside in fourth place which, of course, would see them contest the end of season play-offs but with a queue of teams lining up just a point or two behind them and with a game in hand a-piece ‘Good Old Sussex By The Sea’ know that they are just a couple of slip-ups away from mid-table mediocrity again.

This is why Vicente’s timely first run of fitness and regular action for the Albion is proving so crucial. Manager Gus Poyet has been keen to emphasise the impact of ‘Vice’s’ return to fitness and has gone on record several times in the past few weeks to highlight how he and his squad know that they have a “special player” on their hands.

Sadly though for Vicente, Brighton, and in-fact the football community as a whole, his career has been plagued with injury. His previous club Valencia enjoyed several high profile successes in his time at the club but eventually they were left with little option other than to let him go.

Though he had contributed strongly in every stint of his Valencia career where fitness and injury problems were briefly put to one side, in his last couple of years in Spain he was left so short of match fitness that he barely managed a run of games.

Had his fitness held during the most crucial time in his career it is entirely possible that he could have had several more domestic Spanish titles to his name and that he may even have become a World Cup and European Championship winner with Spain. As it is though, injury has robbed him of his prime  and all the opportunities that would most likely have accompanied it and now he finds himself as the poster boy for a Championship club. 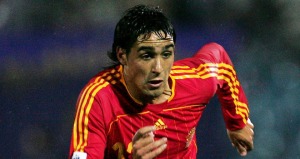 Vicente has a decent amount of international caps, but could have had many more

This isn’t to belittle Brighton as a football club or the fantastic recent progress that they’ve made, but Vicente’s fleeting return to form and fitness on the South Coast has highlighted just how special a talent he once was and just how sad it is that his still very present technical abilities have been constantly undermined by the fragility of his body over the past decade.

Poyet has said this week that he thinks Brighton would be ten to fifteen points better off this campaign if Vicente had been fit for the majority of it to date and these additional points, as it stands, would have seen the Albion challenging for the title.

It is rare to witness such a quality player plying his trade outside of Europe’s top divisions but all Albion fans will be hoping that these current circumstances are soon to change.

If Vicente maintains his fitness for Brighton’s remaining games then Poyet believes they have “a great chance” of making the top six and this sentiment is being echoed from the stands at the Amex.

If only Brighton can keep their prized asset out of the Physio’s room and instead have him out on the pitch on a regular basis for the next two to three months then the South-Coast fairytale may continue to grow. Not only could the delight of promotion back to the Championship last year be coupled with the relief of finally moving into and enjoying their first season at their new home in Falmer, but they could also soon be a Premier League side.

If they do reach the play-offs then it will surely be, in no small part, down to the inspiration provided by the return of ‘Vice’ to their side just as they’ve started to hit the home straight and perhaps their star player could once again get the chance to exercise his on-field powers in one of Europe’s most prestigious leagues if Brighton were to go up.

A couple of years ago the thought of Brighton becoming a Premier League side by 2012 seemed beyond ridiculous, as would the thought of Vicente strutting his stuff in the blue and white of the Albion. Now though, Vicente is lighting up the Championship and the play-offs are within touching distance.

What a difference a couple of seasons can make.