You might ask why I have chosen to pick out just one of her astonishing haul of four gold medals but the first one for the host nation is always a bit special isn’t it! Super Sarah led the charge and broke records a plenty on course to cementing her place as one of GB’s greatest ever Paralympic athletes, if not the greatest.

Ellie Simmonds’ astonishing first gold medal victory of the Games wasn’t in her strongest event and wasn’t necessarily one she was expected to dominate but that she did. This triumph was akin to Jess Ennis’ win in the heptathlon in the Olympic Games as it relieved an enormous weight of pressure and expectation as Ellie Swim-monds went in as ‘The Face of the Games. She then went onto follow this success up with another gold and a silver and bronze to boot. Not a bad few days.

It speaks for itself… 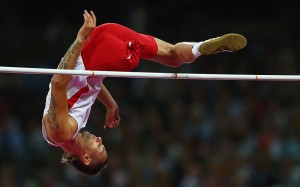 The high jump made for an incredible spectacle

I know every event was amazing in it’s own way but this was just ridiculous. The athletes competing were truly gobsmacking, how on earth a one-legged man can leap as high as these guys were is simply beyond me. I loved watching it though!

Mickey Bushell’s moment of glory was one of the more memorable of the Games from a Paralympics GB perspective. He was already a silver medalist in the World Championships and last time out at the Paralympics in Beijing and now he has finally become a gold medallist at the Games. The emotion displayed by him as he crossed the finish line was a pleasure to behold.

Our very own female and wheelchair riding Usain Bolt. She didn’t just win two sprint golds, she won them by a country-mile. She was supreme.

Smyth suffers from a 10% loss of sight and though that might not sound like the greatest impairment of the many we have seen at the Games, he was still competing in a field of similarly disabled athletes and he blew them all away. I haven’t checked to see whether he is or not but I suspect that he might not only be the fastest ever Paralympian but that he also might well be the quickest Irish sprinter ever, able bodied or disabled. If he isn’t the fastest ever Irishman then he must be bloody close!

Four events, four gold medals. What a hero! Not only did he win four golds but they were in entirely different disciplines; the 800m, the 1500m, the 5,000m and the marathon. The mind boggles!

The picture speaks for itself…

This guy is unreal. He may not have won a medal or even have got that close to winning one, but this veteran of the Spanish track cycling team truly amazed me. In spite of the Velodrome’s steep angled banking he manages to hurtle round the track in spite of missing an arm and leg both on the same side of the body. I quite simply don’t know how he stays on or how he moves the bike!

45 year old former F1 driver Alex Zannardi brought an incredible story to a glorious conclusion at the Paralympic Games this week. Fifteen years on from his horror career-ending crash which left him having both of his legs amputated, he returned to the forefront of the sporting world in phenomenal fashion by becoming a double-gold medal winning hand-cyclist.

The man is an inspiration but in fairness that is true of every single Paralympian I have witnessed over the past couple of weeks, but sadly it is now all over!