Below is my breakdown of United’s major failings in the Champions League this season and my analysis of just why the varying frailties have caused them to fall so humiliatingly from grace.

Throughout the group stages United didn’t exactly set the world alight in terms of either their chance creation or chance conversion and as such they failed to ever really impose themselves on their opposition. When you 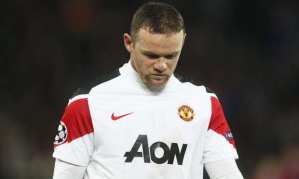 think of United in their pomp you think of their devastating counter attacks and spells of unrelenting pressure that yield a couple of goals a time but these has been very thin on the ground. I am struggling to recall a time when they have looked less likely to turn their pressure into the priceless commodity of goals.

Last night 90 minutes of majority possession and territory was rewarded with just a single goal, and quite a fortunate goal at that! But this lack of productivity has been the story of their group campaign and wasn’t just limited to last night’s disappointing display. Even against Otelul Galati they struggled to provide a major goal threat, relying on two penalties in Galati and then one horribly deflected strike on home turf against the whipping boys of the group en-route to achieving just four goals from two games against the minnows.

There are several contributing factors to the lack of a genuine goal threat but the most significant has been that no one has stepped up and taken on the responsibility of being chief goal-getter. Rooney has scored a few in the group, though as mentioned two were spot kicks, Hernandez has failed to accumulate a strong tally, Berbatov has found his opportunities severely limited and Danny Wellbeck has spent too long on the sidleines with niggles to have a serious impact. Just like in international football, you simply must take the limited golden chances that come your way and United simply haven’t.

2) Limited creation and no natural holding player in central midfield:

It was reported all summer that Sir Alex was flirting with a pricey move for Wesley Sneijder and boy how they could’ve done with him throughout the group stage. United’s ability to unlock the door with the midfield has always been a strong-suit of theirs with the likes of Paul Scholes providing the creative instinct, but, since 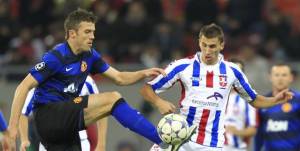 Scholes’ retirement United have struggled to find a suitable replacement from within the camp and haven’t brought anybody else in to fill the void.

Against Basle last night it soon became clear that United are desperately lacking in terms of central creators and as such they were only having joy out on the flanks. In the first half Nani was in electric form and was being given plenty of the ball due to United’s inability to create chances through the middle, but as soon as Basle cottoned onto this they were able to swamp Nani and provide extra cover out wide, thus negating his previously constant threat. The angle of attack, as it has been in several games, was far too predictable and it all stems from their inability to emulate the likes of Barcelona and create from the central areas of the pitch.

Another worry for must be their absence of a natural holding midfield player. Michael Carrick and Darren Fletcher are both decent at playing from deep and can both be fairly combative but they don’t quite fulfil the sort of role that Sergio Busquets or Xabi Alonso do for Barcelona and Real Madrid. We even saw Chelsea’s fortunes dramatically improve in their Champions League tie on Tuesday night courtesy of Oriol Romeu’s very successful inclusion in the defensive midfield role. United must act quickly to find their greatest fit to this role, and with Nemanja Vidic’s potentially very serious injury it appears that Phil Jones is going to be needed in defence and therefore won’t be a particularly viable option.

United’s inability to keep clean sheets in the group has been a major theme in their downfall. It is very unlike 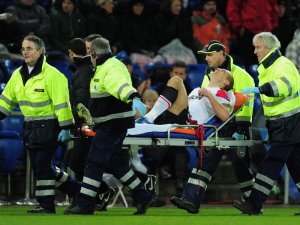 one of Sir Alex Ferguson’s sides to be so fragile at the back and arguably the two games against Basle provided the greatest examples of this weakness. In the home game against Basle they managed to slump from two nil ahead to a losing position within the space of about 20 minutes and in this period the defending was horrific. Last night witnessed Basle very much on the back foot throughout, but every time they did venture forwards United looked unstable. Xerdan Shaquiri’s strong running on the flanks and through the centre struck fear into the United defence and they continuously backed off from him allowing to roam further. Very rarely did Basle muster up a goal scoring opportunity in the game, but they still somehow managed to net twice and come out on top, this speaks volumes about the uncertainty in United’s defensive ranks at present.

It is worth mentioning that injury problems have compounded the defensive issues with the likes of Rio Ferdinand, Nemanja Vidic, Chris Smalling and the Da Silva twins all having spent periods of the group stages on the sidelines. The spate of short term absences in United’s defence have led to great levels of unavoidable inconsistency in selection and as such the performances at the back have tended to follow suit.

Another contributing factor to United’s defensive uncertainty has been the unconvincing displays in goal of David De Gea. In the opening game of the group United faced Benfica and Sir Alex opted to play Anders 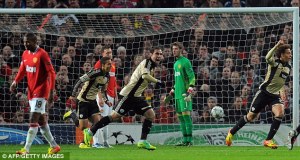 Lindegaard in goal ahead of De Gea and he impressed in this outing. Since though, Ferguson has tended to go with his number one De Gea and has been left a little let down by his young Spanish stopper.

Last night’s problems began with United conceding the early goal and De Gea was certainly partially at fault for this. When Shaquiri fired in his stinging cross De Gea opted to deal with it using his legs when getting his upper body in the way probably would have been more appropriate, and this hasn’t been his only blunder of the group stages. Against Benfica he over-estimated his undoubted ability when it comes to playing and distributing the ball and attempted the sort of cute delivery that you might see Xavi and Andres Iniesta attempt in the attacking third for Barcelona. Needless to say this ball was cut out and led to the equaliser which killed United’s momentum and effectively lost them two points, which of course would have seen them avoid their embarrassing early exit from the competition.

In essence, Manchester United spent far too much time failing to make the most of their possession and territory in attack and then looked incredibly vulnerable when defending against the opposition’s counter-attacks, and it has cost them their place at European football’s top table. Sir Alex Ferguson must take serious note of his side’s weaknesses and must act quickly to try and remedy the many frailties that have been so damagingly exposed on the continent thus far this season. At least the Europa League will be fun… my mistake…